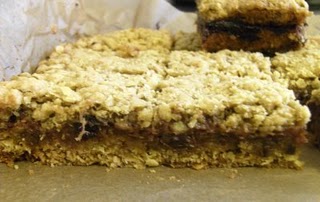 Stir the first 4 ingredients together well  Add butter: blend until it resembles coarse meal, then stir in almonds.

In a large bowl toss the apples & sultanas with the juice, sugar & cinnamon and transfer mixture to a buttered, 6-cup deepish pie plate.

Crumble topping evenly over the apple mixture and bake in centre shelf of a preheated 190 degree C oven for 25-30 mins, or until apples are cooked and the top is golden.
Let the Crisp stand 10 mins and serve it warm.